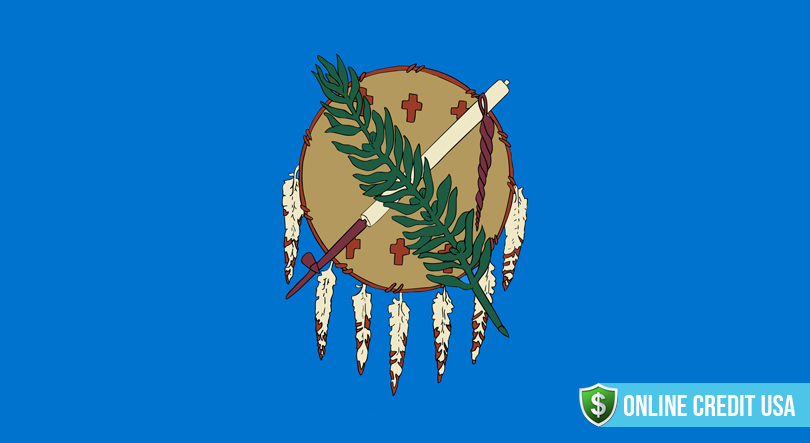 Oklahoma was originally highly populated by Native Americans and the name of the state comes from the Choktaw words that mean ‘red people’. After the Indian Appropriation Act of 1889 which allowed non native settlers, there was a flood of immigrants waiting to stake a claim for the best pieces of land and these were called ‘sooner people’ so the state became nicknamed the ‘Sooner State’.

It was not until 1907 that Oklahoma joined the Union as the 46th state and since that time the population has substantially increased and the economy has become more diverse. Instead of relying on the production of cattle which was the main influence in creating wealth in the state, Oklahomans now work in many other sectors.

Two thirds of Oklahomans live within the metropolitan boroughs of Tulsa and Oklahoma City and in spite of the wealth in some areas of the state, poverty is still a problem. In fact, despite good growth during the period up to 2015, the median household income measured at that time was $47,529 compared to the national average of $72,641. In July 2017 the unemployment rate was 4.4%, lower than the national average but due to the low incomes that persist in some areas, many families are using payday loans.

The poverty rate in the state is also high with figures in 2016 showing 270,000 people living in extreme poverty including 95,000 children. This amounts to 21.8% of children living below the poverty line. With figures like these it is no wonder that so many people are relying on payday loans to help out when an unexpected bill arrives.

The diverse economy in Oklahoma has helped the state to grow and employment in aviation, food processing and energy has driven up the gross domestic product. Nevertheless, the state lies fortieth on the list of highly productive states 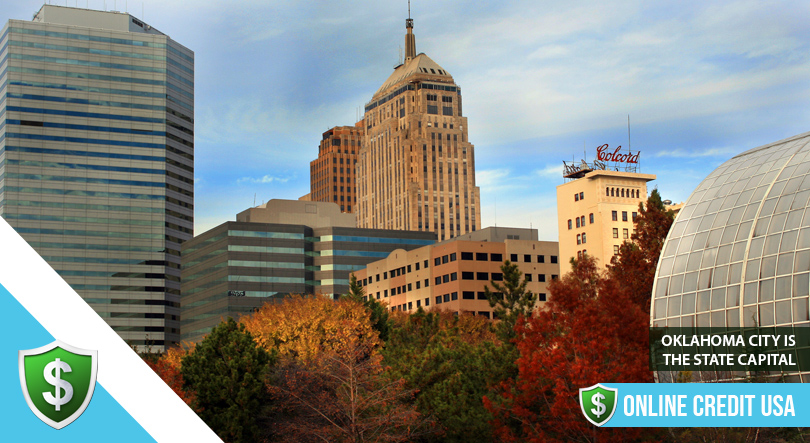 Oil was historically a big earner for Oklahoma but when the oil price collapsed in the 1980s it led to the loss of many jobs. Fortunately, other industries have helped to get Oklahoma back on track and now many people are employed in the transportation and utilities sectors. Tulsa has the largest airline maintenance base in the western world and biotechnology is also on the increase in this forward looking state. Major employers in Oklahoma include Boeing, BancFirst (NASDAQ) and American Airlines.

In 2016, the state regulators decided to shut down these lenders who were using a loophole in the law to provide loans are very high rates. Several owners have been charged with criminal racketeering and violations of federal laws. The rules regarding payday loans in Oklahoma are very clear and these are set out below.

Loans are legal under Okla. Stat. Tit. 59 3101 et seq. and this law allows lenders to offer loans under the Deferred Presentment Service Act. All lenders must apply for a license which is granted by the Department of Consumer Credit, the regulator for payday loans in Oklahoma.

Lenders are restricted in the amount that can be loaned and the maximum amount allowed is $500. The loan must run for a minimum of 12 days and a maximum of 45 days from the date of the signed agreement. Loans of up to $300 may be charged at 15% and loans over that amount are restricted to a 10% rate. This makes the maximum interest rate 390% APR.

Lenders are not allowed to give rollover or renewal loans. This means that you cannot take out another loan to pay of the original sum. No more than two loans may be taken out at any one time. But, borrowers may use different lenders for the loans as long as the total does not exceed the stated maximum. A borrower has a grace period up until 5.00 pm the following day to change their mind.

So, after the application, if you have decided against taking out the loan, you can cancel with no charges as long as it is within the stated time limit. There is no limit to the number of loans allowed each year but borrowers must be given a two day cooling off period after five consecutive loans have been taken out.

A one off collection fee of $25 can be charged for non sufficient funds. So, if the lender presents a post dated check and your bank refuses payment you can be charged this fee.

The Center for Responsible Lending created a report in 2013 that showed 358 licensed payday lending stores in Oklahoma. During that year the average number of loans per store was 2687 and the average amount of the loan taken out was $394.

Lenders are restricted in the amount that can be loaned and the maximum amount allowed is $500.

The total amount borrowed came to $404,600,000 and fees amounted to $54,300,000. Regular borrowers were taking out at least 8 loans each year meaning that a great number of people were rarely out of debt.

In 2014, the Oklahoma Department of Consumer Credit found 324 lenders but the real number was probably higher as some lenders were not registered. Additionally, as online lenders were on the increase, the true number was not available from the available data. 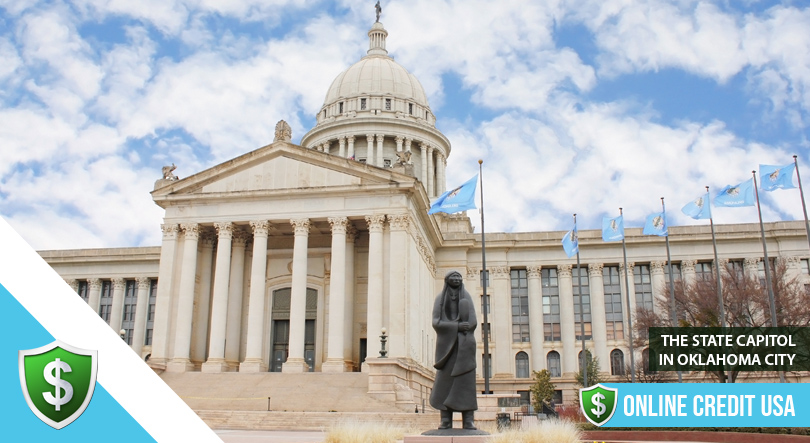 What became clear was that 40% of the lenders were based in Tulsa and Oklahoma City and most of these stores were located in areas where low income families, immigrants and young adults were living. These groups are the main targets for lenders who know that they are the ones that are in most need of payday loans.

Looking through Yellow Pages reveals a total of 761 payday loan stores. There is one state licensed online lender. In 2015, 5.2% of adults in Oklahoma took out a payday loans and the average amount borrowed was $366.

The split between men and women was exactly 50% and people on a low income of up to $15,000 took out 29% of the total loans. People renting their home took out 57% of loans compared to homeowners who had 43% of the share. There was a high percentage (45%) of borrowers who were in full time employment. This is in line with the figures for other states and reflects the low income status of most payday loan borrowers.

The official regulator for payday loans is the Oklahoma Department of Consumer Credit. The regulations state that a top rate of 390% APR may be charged and this is lower than some of the other states where payday loans are legal. Nevertheless, it is still a high rate to pay for a short term loan and using payday loans should only ever be considered as a last resort.

Lenders must apply for a license before offering loans and a license is required for each set of premises. Lenders may not take the borrower to court to collect an unpaid debt. A payday loan is an option to be considered as a short term solution to a specific financial problem but should not be used regularly to top up wages. The regulator oversees all licensed lenders and if you have a complaint or concern about the terms of a payday loan you can contact the organization at the following address:

Payday loans offer short term credit and fast cash. In Oklahoma, residents are using these types of loan at a faster rate than most other states. The result of living from one paycheck to the next is a high take up of payday loans and this is exacerbated by state low incomes which even apply to professionals like teachers.

Ten years after payday loans first appeared online, there are now more online loans than for any other kind of financial product. However, at least the regulators have put a stop to predatory lenders who have been using tribal lands as a base which meant that they were not subject to the rules laid down by law.

Online lenders that operate in Oklahoma should adhere to the regulations laid down by law. So, if you are looking for a short term loan it is very important to make sure that the lender is not charging more than the maximum interest rate allowed. Looking for online loans is easy and the application process is simple. Borrowers must be over the age of 18 and be a permanent resident in the US or be a US citizen. 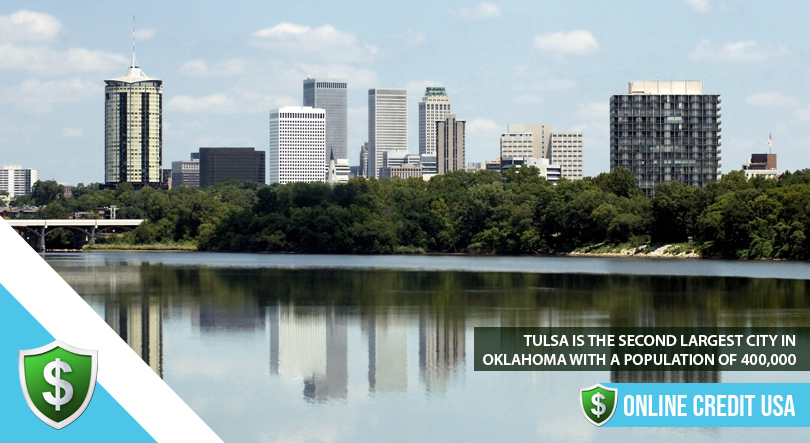 In addition to proof of identity, you are required to produce your social security number, proof of address and proof of income. The funds from an online loan are deposited directly into your checking account and when the repayment becomes due the lender withdraws the amount plus the interest. Keep in mind that fast cash advance loans are designed only as a short term solution to a financial crisis. They should not be used for buying luxuries or paying for a vacation.

The simple process of applying for a payday loan online makes it an excellent choice for many people. Add to that the benefit of complete confidentiality and anonymity and you can see why many people make this choice. You can also get a better deal by making comparisons between online companies and as the amount of lenders is increasing, competition will be higher so the rates may drop.

Eligibility for a payday loan

Almost anyone will be eligible for a payday loan so it does not matter whether your credit rating is poor as long as you comply with the income requirements and have a functioning bank account. Income can be from a job or from a state benefit like a pension or social security payment. Remember that if you change your mind you can cancel the contract before 5.00pm the following day and the cancellation is free of charge.

Where to get help

There are other options for anyone who does not want to take on more dent in the form of a payday loan. In Oklahoma the Temporary Assistance For Needy Families Program and the Supplemental Nutrition Assistance Program are two organizations that can with daily expenses.

Almost anyone will be eligible for a payday loan so it does not matter whether your credit rating is poor.

The state also has the Low-Income Home Energy Assistance Program which can help families to cope with large energy bills.

Summary of payday loans in Oklahoma

Payday loan lenders in Oklahoma require applicants to be over the age of 18 and in receipt of a regular income. You also need a checking account and proof of identity. The maximum sum allowable as a loan is $500 and the maximum term allowable is 45 days. Rollover loans are not permitted and lenders cannot split loans and charge extra fees. The maximum rate that can be charged is 390% APR. The most important point to consider is how the interest rate works and if you do not make the full repayment on time the loan can quickly add up as interest is compounded.